On Wednesday this week the Chancellor of the Exchequer, George Osborne, will set out the government’s spending commitments for this parliament. We have already seen important announcements from the government on increasing frontline resources for the National Health Service and our armed forces, which are to be welcomed. Another of the key areas we have been lobbying the government, is investment in the transport infrastructure in Kent, particularly to help us cope with the growing numbers of lorries using our roads.

Is there any money for Operation Stack in that case?

Earlier this month I led a delegation of 12 Kent MPs to see George Osborne to ask him for financial support to fund a long term solution to Operation Stack. This will require off road lorry parking facilities where vehicles can queue before being called to the Channel Tunnel or Port of Dover. This should be integrated directly into the motorway network so that other roads are not disturbed when Operation Stack is enforced. Creating off road parking for lorries will also allow the continuous flow in both directions of motorway traffic at all times. By creating new facilities like these, we can also take tougher enforcement action against lorries that routinely park up on roadsides and in residential areas across the district. Lorry drivers will no longer have an excuse that there is nowhere else to go, and they should be fined for parking in areas which create mess, disturbance for residence, or endanger other road users. Shepway Council has already started to take enforcement action against lorries parking along the A20 between Sellindge and the Channel Tunnel terminal.

Last Friday was the opening night of the Folkestone Literary festival, and my wife Sarah and I joined a full theatre at the Quarterhouse to see Louis de Bernieres read from and discuss his new novel, ‘The dust that falls from dreams.’ The book is set in the early part of the twentieth century and features a dramatic scene set in Folkestone during the First World War. The Creative Foundation has confirmed that ticket sales for the literary festival are over 30% higher than this time last year. 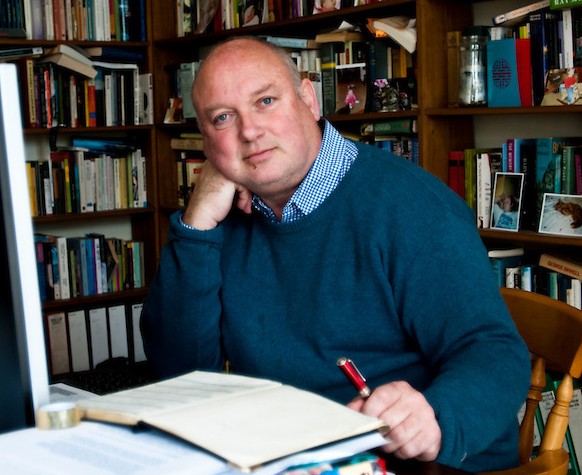 Author, Louis De Bernieres at his home in Norfolk.

Louis also turned on the Christmas lights in the Old High Street that evening, and it was great to see so many people out in the creative quarter. There are a number of excellent businesses that have recently opened in some of the newly refurbished buildings on the street, and it is great to see this part of the old town doing so well.

On Saturday I joined the Chairman of Folkestone Invicta football club, Jim Pellatt for their home game against Peacehaven. It was good to see Folkestone continue their successful run of form and consolidate their position at the top of the Ryman League South. The club also used the fixture to raise money for Motor Neurone Disease, and successfully collected over £5,000. I’d like to send my congratulations to everyone involved in this excellent initiative