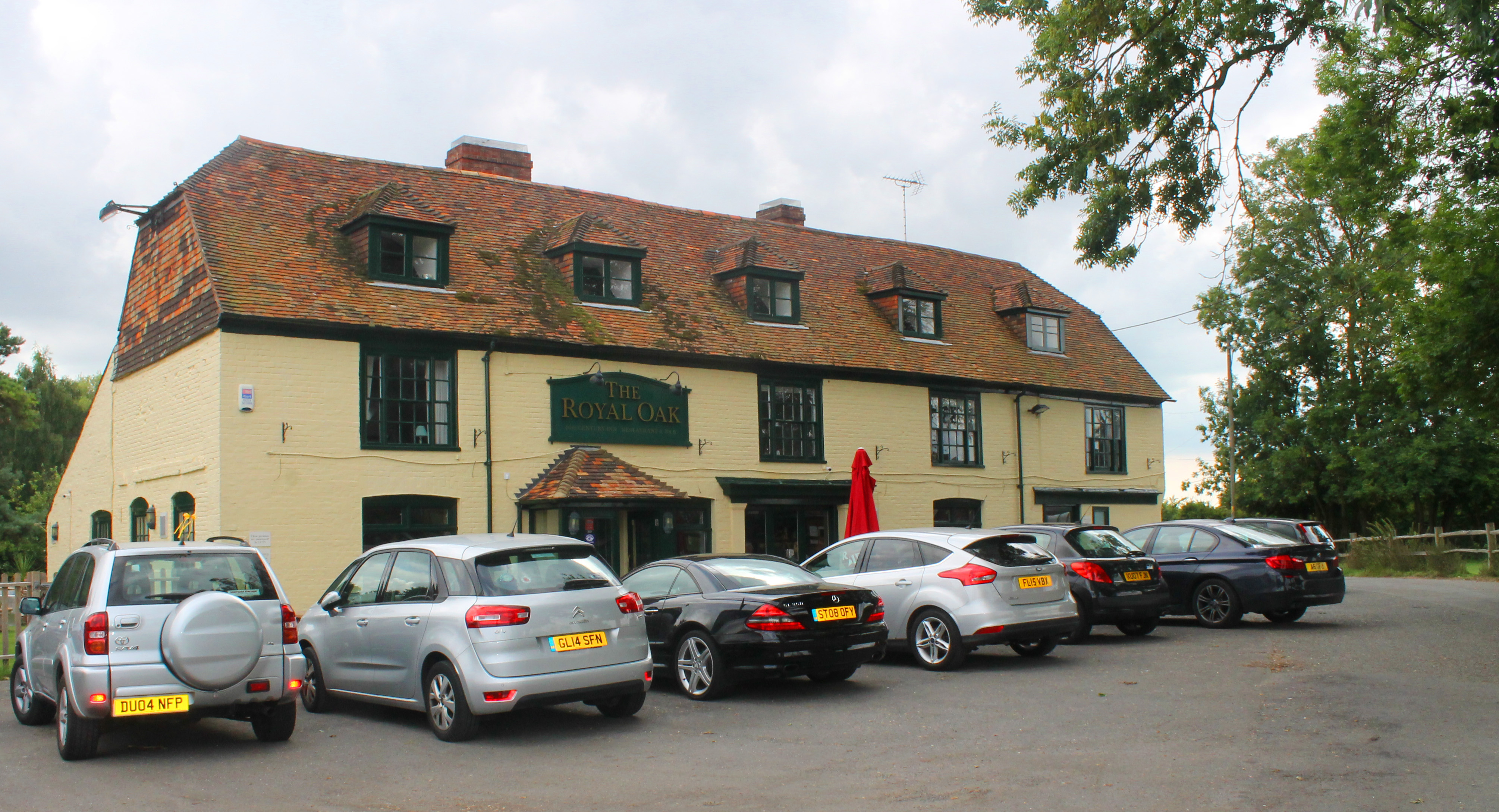 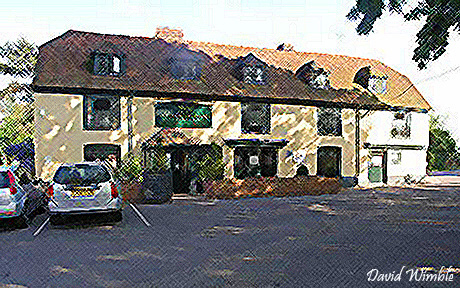 By R A C Fishman food critic for The Looker

Having seen the advert in the last edition of The Looker stating that the Royal Oak had new owners in Brookland, the Glamourpuss and I jumped at the chance to sample it and hot-footed it across the beautiful Romney Marsh, taking in the beautiful scenery and stunning sunset.
The first thing that we noticed when we rolled up at the pub was how many cars were in the car park (always a positive sign).On entering, we were greeted with a warm welcome and some friendly banter by owner Kevin Gillespie who has added the Royal Oak to his stable of popular establishments that includes Gillespie’s and The True Brit, both at Folkestone Harbour.
The bar area with it’s rustic charm, was bright and bustling with a good selection of beers and wines, with several patrons all enjoying their drinks ,word definitely seems to have got round, as it’s only been open a matter of weeks.
We were soon shown to our table by Pauline, our waitress for the evening. The restaurant, with its period tables and oak beams was equally busy with just about every table full but has the added benefit of opening out onto a terrace for alfresco dining. The Glamourpuss pointed out how nice it was not to have booming music played, but instead buzzed with the gentle hum from contented diners.
After perusing the impressive wine list containing a wide selection from across the world including French, Spanish, Italian, Australian, New Zealand and American, with prices starting from £14.50 – £30 and sparkling wines from £18.50 – £90 if you are feeling extravagant.
The Glamourpuss opted for the house white, a fruity Italian Pinot Grigo, which she thought was very nice, whilst I opted for a pint of Nastro Azzurro Pironi.
Onto the first course, and after considerable deliberations due to the mouthwatering range on offer, the GP chose the Ham Hock and Chicken Terrine (£5.95) whilst I had the Pil-Pil Prawns (£6.95).
The presentation of both dishes was simple and classic, with the meaty terrine served on a slate strip with a pot of homemade piccalilli and sourdough toast. 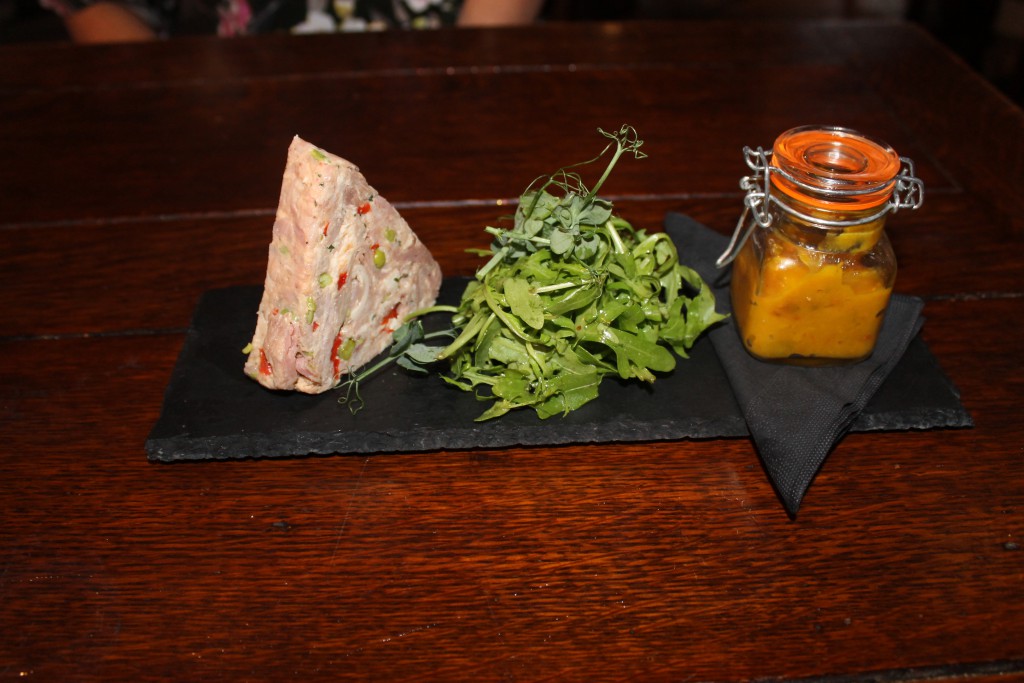 The Pil-Pil prawns were deliciously plump and served in a spicy olive oil dressing of garlic, chilli and lemon and a large ‘chunk’ of crusty bread.
Both dishes were certainly plentiful and left us anticipating whether the kitchen could maintain the standard for our choices of main course…
Whilst we waited we looked around and noticed how efficiently the two waitresse’s, Pauline and Kerry worked the room, adeptly serving and checking on diners whilst not being intrusive, along with Kevin who made the time to visit each table to ensure the ‘experience’ was good and everyone was happy.
We needn’t have worried as our main course’s arrived. You only get one chance to make a first impression and chef did not disappoint! The GP had a very ample portion of slow roasted belly pork (£14.95) that was so tender and, as she exclaimed, literally melted in her mouth! With roasted apple and shallots and a deep, rich local cider jus. I chose the pan roasted local lamb rump (£15.95) carved into medallions on crushed new potatoes with a rich red wine jus served with creamy cabbage and bacon, both dishes was accompanied by a large bowl seasonal vegetables. Both dishes were more than substantial with the GP stating that a day down the gym would ensue the next day!
Other main course highlights on the menu are, the piggy mixed grill and all steaks which are 35 day aged for flavour and tenderness and well 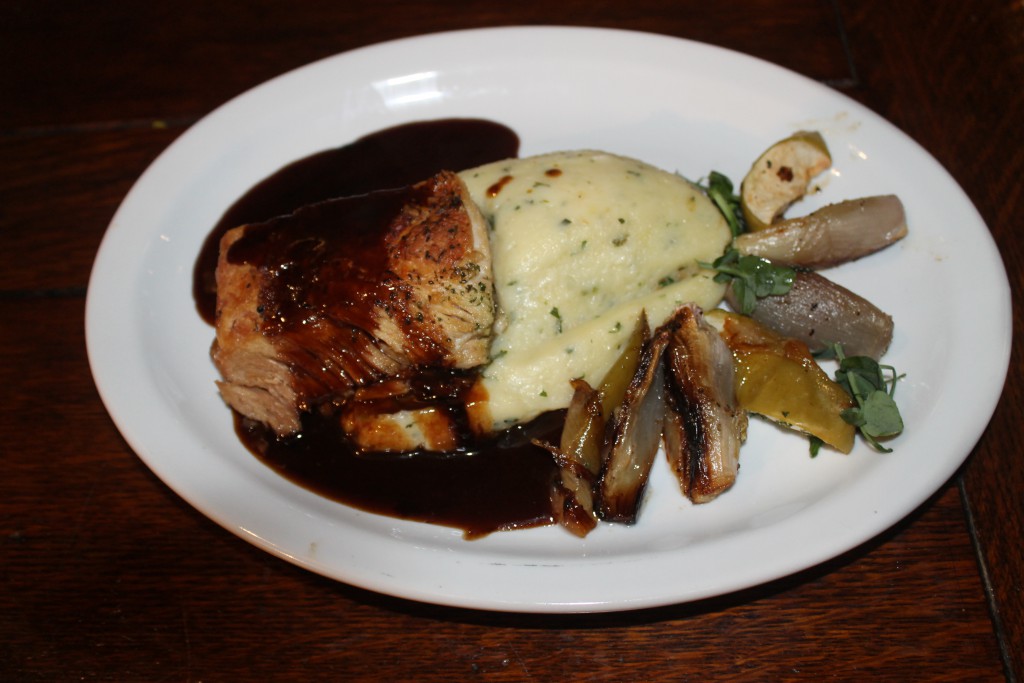 as the usual pub classics.
With the main course devoured and feeling pleasantly replete, we felt duty bound to indulge in the dessert selection.
As the GP said, some establishments treat the dessert as a bit of an afterthought, but not here! She was presented with the cappuccino crème-brulee, which was deceptive as it was served looking like a cappuccino complete with whipped cream and chocolate sprinkles, but as soon as she dug her spoon inside and cracked the caramel top and found the smooth interior she knew it was the classic dessert, one mouth-full had her purring it was a ‘coffee lovers dream’.
I opted for the lemon possett, a pot of creamy, tangy, mango and raspberry glazed loveliness, simple but very effective.
A nice touch as we finished of our meal was when Head Chef ,Chris Waters, a world class chef who has cooked for many celebrities and worked in numerous well known restaurants around the world, emerged from the kitchen to introduce himself and to chat to diners, making sure they had enjoyed his efforts. With just Sous Chef, Darrel Kidney, working along side him, the pair are determind to put the Royal Oak firmly on the culinary map.
The pub has had a chequered past since it first opened its doors to locals and farm workers back in 1736 after gaining permission from the 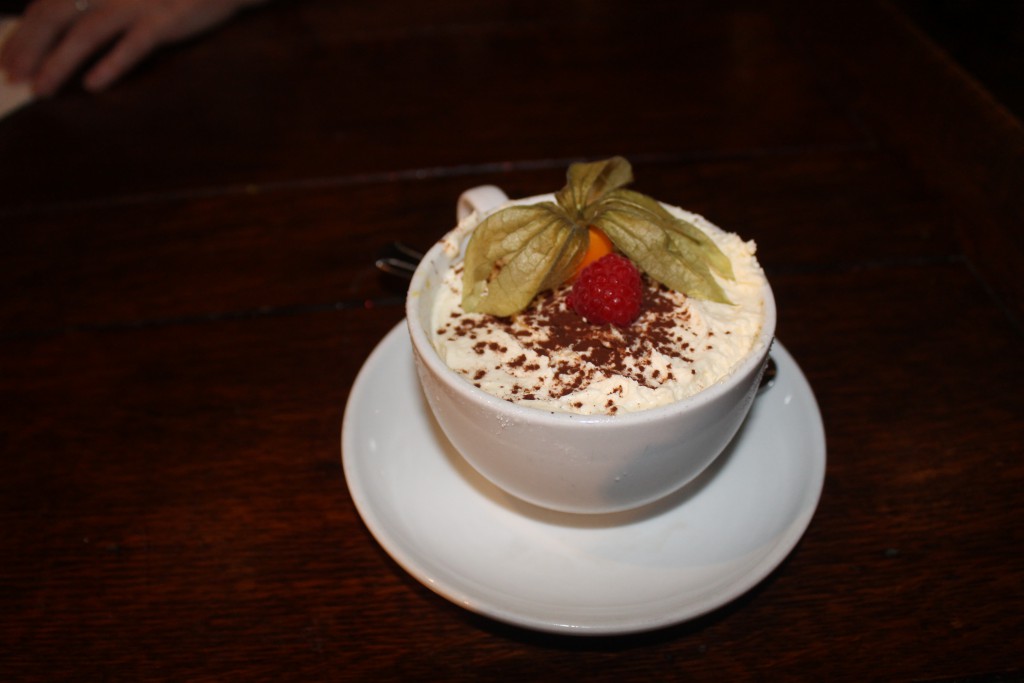 local vicar (on strict instruction that no alcohol was consumed during his services). Being slightly off the beaten track, Brookland has only previously been noted for its historic church with its steeple on the ground. Now however, it has a hidden gem that’s well worth seeking out, serving excellent quality food locally sourced. When we confessed after our meal that we would be reviewing the Royal Oak for The Looker, Chef Chris stated that anyone mentioning they are dining there as a result of seeing this review, will get a free glass of house wine with their order.
On balance, we could not fault the service, the food or the surroundings.We had a very enjoyable evening in a beautiful historic building with some great food. 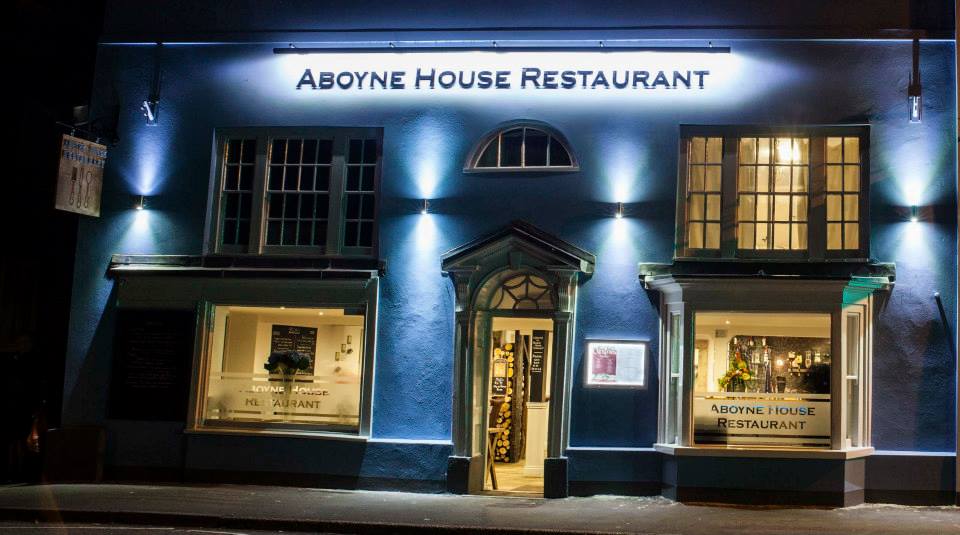 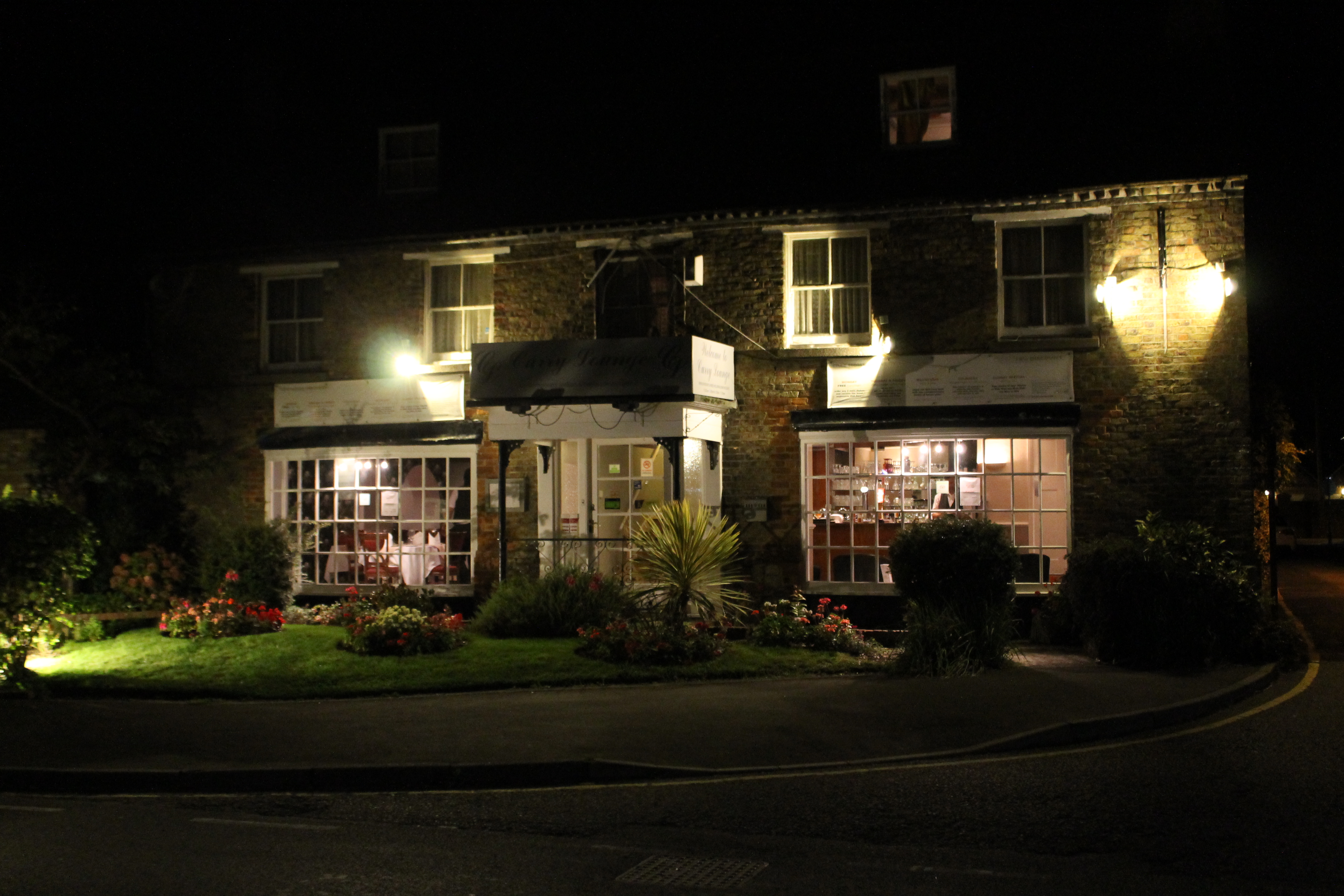 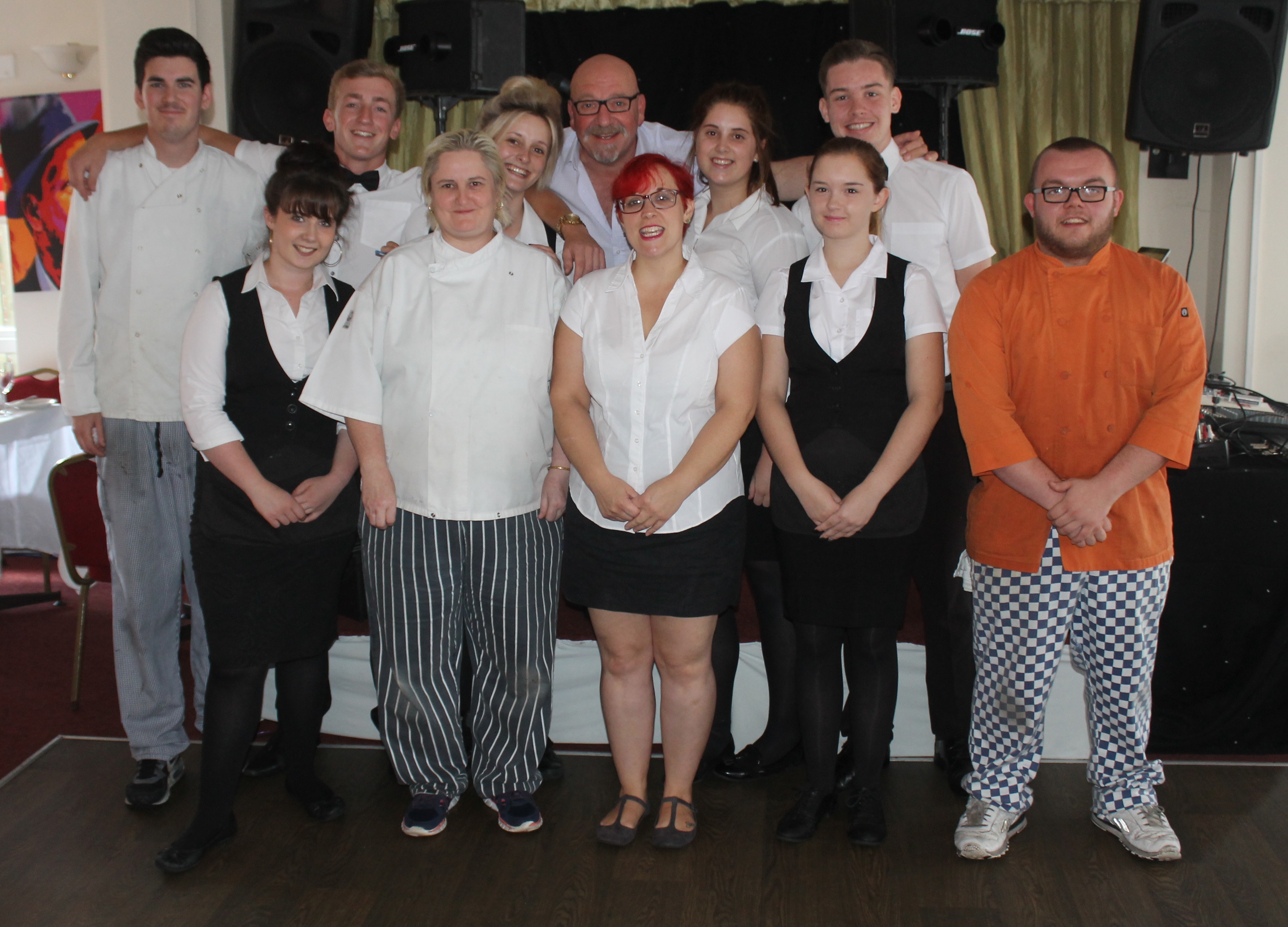